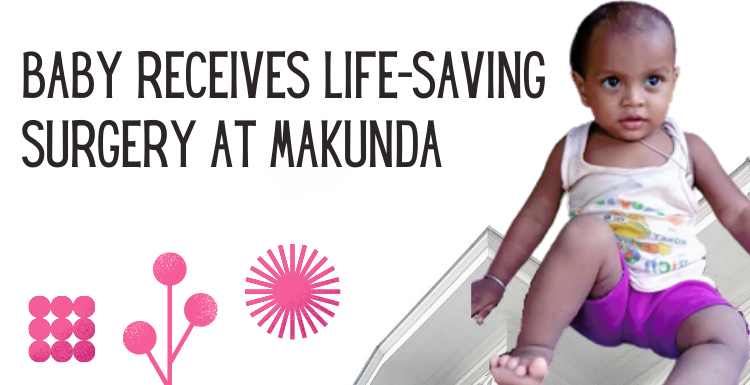 Ansh, a healthy baby boy, was born in August 2020 to parents Ashu and Kalpana. Ashu is a farm laborer earning 600 rupees ($8) a week, barely enough to feed his family.

When Ansh was a month old, he received his scheduled hepatitis B injection. After nine days, his family noticed swelling at the injection site and took the baby to the local government hospital. The doctors found an injection abscess that required immediate surgery, and Ansh was referred to a private hospital. The estimate for the surgery was 20,000 rupees ($267), so in desperation, the family sold their land for 10,000 rupees. They spent nine days in the hospital and used up all their money without Ansh even receiving the needed surgery.

One of their neighbors suggested the parents take Ansh to Makunda Christian Hospital where he might receive the medical care he needed. Even though the pandemic was limiting travel and they were out of money, they courageously set out for Makunda.

When they arrived, they breathed a sigh of relief that their baby was in the hands of experienced doctors and nurses who would operate on Ansh’s abscess and provide the necessary intensive care. After 15 days in the hospital, Ansh was ready to be discharged, and he was sent home with a month’s worth of antibiotics. Ansh’s total medical bill was 33,000 rupees ($440), which was completely covered by the hospital and the Ekam Foundation.

Ashu and Kalpana were able to take home their healthy baby. Ansh is now a symbol of hope that in these difficult times, there are still people who care and who help others. Although the couple went back to their old lives of difficult work, the love and support they received from the Makunda Christian Hospital staff at just the right time brings them joy.