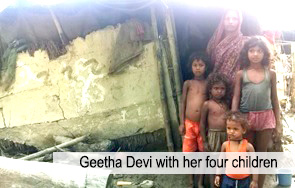 Geetha and her husband Lalbihari have 4 children – 3 girls and 1 boy. The eldest girl is aged 10 years. Lalbihari is a daily wage labourer and in a month he doesn’t gets work on a daily basis. During the flood on 13-14 Aug 2017, their house was half submerged in the water and as the walls got damaged, the entire house has tilted to one side. It may fall down at any time.

When the staff of Ashish project visited the village immediately after the flood for needs assessment, they found the Geetha Devi and her four children in a damaged house and were moved by their starved and pitiable condition. Since the head of the family could not find any work due to flood and all the things in the house had been destroyed by the flood waters, the entire family had been starving for two days. The chulha (mud stove) had been destroyed and all the provisions had been damaged. As the house had tilted to a dangerous angle, for the sake of safety, the family had been sleeping out in the open beside the damaged house. Exposure to weather and lack of food had greatly affected the family especially the children who looked as if they had been starving for many days. None of the children had proper clothes too. 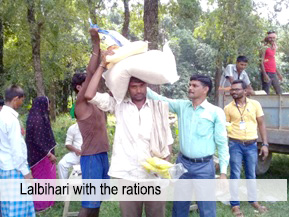 As an immediate relief, through the project staff rice, potato and soya beans were provided. Clothes were also provided for the children. This initial assistance was a great help to the starving family.

Later, they were also provided with the dry ration and health kit that was funded by TearFund which included rice (25 kg), Atta (5 kg), Dal (3 kg), Sugar(2kg), Soya (1 kg), Oil (2 litres). This was a big support to the family to tide over till the situation could return to normalcy and Lalbihari could find some work. If this relief measure was not undertaken, the plight of the family would have been extremely bad.