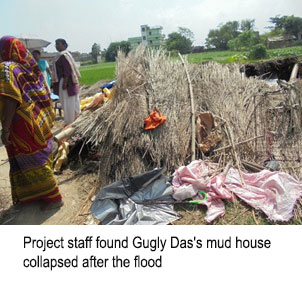 Gugly Das, 40 years earns his living as a rickshaw driver. His family consists of his wife and 5 children – girls aged 6, 8, 10, 12 years and a boy aged 2 years.   On 13th august 2017, there was gradual flooding due to heavy downpour. But suddenly the flood started rapidly increasing in speed and volume and people started running towards higher grounds deserting their houses and things. Gugly das and his wife too panicked when their house started collapsing. They gathered all their children and ran carrying the smaller one and with great difficulty took all of them to a neighour’s house which was on a higher ground. There they stayed in a corner all night in their wet clothes shivering from the cold. Later in the morning, generous neighbours provided them with food. They stayed like that for 2 days. No help arrived till then. Gugly das’s house had totally collapsed due to the flood and most of the household things got carried away by the rapid water or got damaged including important documents like ration card. 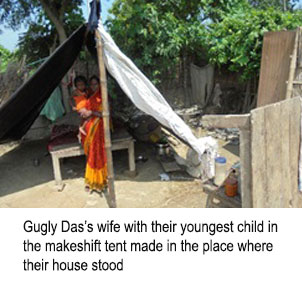 After 2 days, when the water level had receded, Gugly das pitched a tent in the open and lived with his family there when the Roshini project staff went there for needs assessment. The plight of the children was very pathetic as they didn’t get sufficient food and Gugly das was unable to resume his work as the rickshaw got badly damaged in the flood. Through the project staff, relief materials were provided for the family which is a great help to them to feed the children until Gugly das is able to return to his work. The family also attended the health camps and got treated for rashes and other sicknesses that the children had got due to exposure and poor diet.