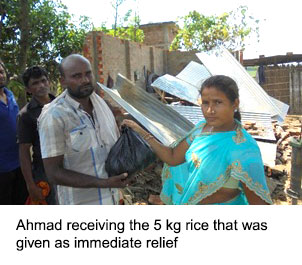 Ahmad is daily wage agricultural labourer and his household consists of 8 members – himself, his wife, 3 daughters and 3 sons all below 12 years. He is the only breadwinner of his household. Work is not available throughout the month and during lean periods, he managed by borrowing money from the well to do people in the village. They lived in a house made of brick walls and tin roof.

During the flood on 13th August 2017, the walls of his house collapsed and with great difficulty the couple managed to take all the six children to a safe place. In one day, Ahmed lost his house and as the fields which were the source of his work got submerged in water, he lost his livelihood too till the next season. 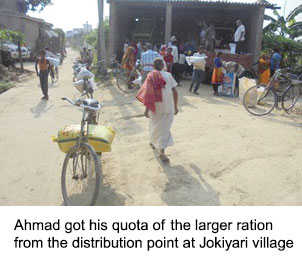 Ahmad had to take refuge in the generosity of his neighbours and other good hearted people. The Ward Member of his village took pity on his family, arranged for a temporary place to stay in and provided food for few days too. But no other government help reached Ahmad’s family.

Meanwhile, the Roshini project staff who visited the village for needs assessment found the family in a sad condition and arranged for the first round of relief materials. Later, the family was also provided with one month’s worth of ration which would help the family to tide over the worst period.