Project Axshya, which was initiated in August2010,has completed 5 years of its implementation cycle.This project supported through the Round 9 India grant of the Global Fund against AIDS, Tuberculosis and Malaria for India covers 374 districts in 24 states. EHA is implementing it in 25 districts in 8 states, covering 53 Tuberculosis Units (TU) and 174 Designated Microscopy Centers (DMC).

Phase II, which started in April 2013, will end by 30th September 2015. As opposed to Phase 1, Phase 2 was a more concerted effort at identifying symptomatic through limiting the focus to a maximum population of 10 lakh of 2 TUs in a district and activities such as Axshya SAMVAD – and intensified house to house outreach activity. In the past year EHA worked with 89 partners NGOs/CBOs at the district level. Through the following activities undertaken in Phase II,2,012,224 persons have been informed on basics of TB and 3115 persons were diagnosed, of which 3017 put on treatment.

Some of the major outcomes of these activities of Phase two are given below. 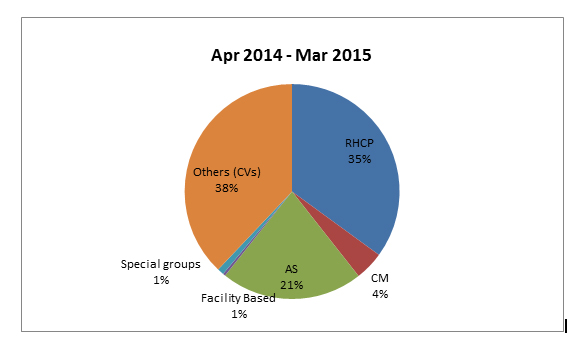 From Disease to Determination – A success story

Nand Kishore is one of the many unorganized manual laborers working in the stone crushing industry in Sonbhadra. For five years he had been suffering from constant cough which was weakening his body so that he looked far older than the 38 years old man he was; but none of the doctors he went to were able to cure it.

Through Project Axshya he was tested for TB at the government health facility in Madhupur in 2012 and found positive for it. He started his medication from the same facility but stopped after 2 months. The NGOs volunteer got to know of this and counseled him, persuading him to start treatment again and complete it. He was cured of TB at the end of treatment this time.

This motivated him to search out others in his community and workplace that suffer from similar symptoms like his and advise them to get tested for TB. His wife Hiran Devi, who though physically challenged, is his able assistant in this endeavor. Together they counsel persons with TB symptoms in their little house and have so far have transported for testing, sputum samples of 639 persons to the DMC, some 25 km away. Of these, 99 were identified positive for TB and started treatment under RNTCP. The program put 37 of these patients under their care to observe medication taken under the DOTS strategy.

Hiran Devi, while sharing her experiences through this journey, recounts that initially they would visit houses of those who they knew were symptomatic of TB and were taking medications from elsewhere. But those persons would talk rudely to them and ask them to leave. Still they persevered and today those very people hold them in high esteem, valuing what these two have done for them. Now they do not have to go house to house, but symptomatic are guided to them for guidance.