Provision of Palliative Care (PC) is a challenge for health services in India. An estimated 6 million people need palliative care in the country each year, but less than 1% of these have access to it. Approximately 645,441 children on any one day need palliative care and only 0.7% of them receive it. EHA started development of palliative care services in rural north India in 2009 with a 3-month needs assessment at Harriet Benson Memorial Hospital (HBMH) in Lalitpur, Uttar Pradesh. This highlighted that patients with palliative care needs were sequestered within their homes, often with little care from their families. They had often spent large amounts on cancer treatment and were not able to afford further care. On the basis of this evidence, a palliative care service was established at HBMH in April 2010.

The 14 EHA hospitals where the Palliative Care service is currently provided (in order of start year) are:

14,066 patients were provided Wholistic Care by the Palliative Care teams, of which 94% had cancer and 16% had HIV & incurable noncommunicable diseases.

New Palliative Care services in 2016: Lakhnadon Christian Hospital started Palliative care service In January 2016 with a team of an IAPC trained doctor, 2 nurses and driver; providing home care at a distance of 10-15 kms around the hospital. The aim is to care for 20 patients at a time, along with Outpatient and Inpatient care. Chinchpada Christian Hospital began PC on April 2016 with one doctor, a nurse and an experienced community coordinator who did widespread awareness and networking. The hospital acquired an opioid licence and is pursuing a partnership with the State Government under the National Health Mission’s Non-Communicable Diseases initiative. Nav Jiwan Hospital, Satbarwa will start PC in August after training of key personnel. 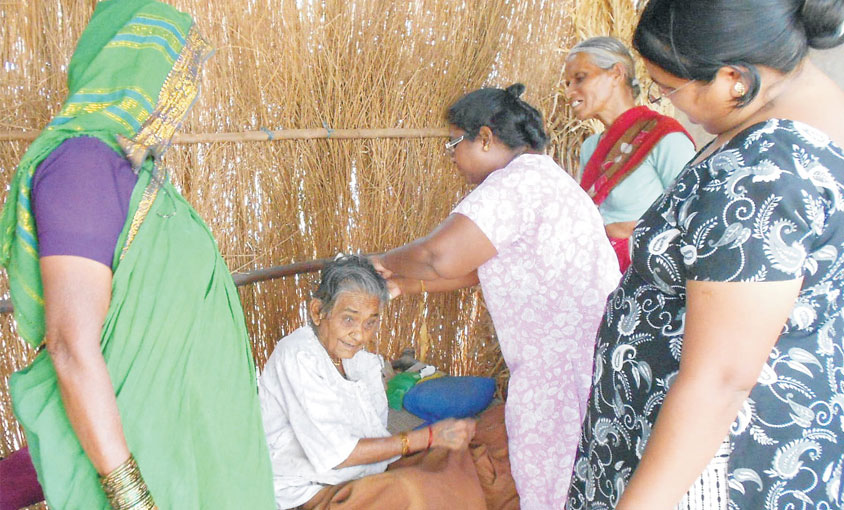 Two sessions on the Basic PC Course of Indian Association of Palliative Care (IAPC) were held at HBMH, Lalitpur in June and November 2015. So far 55 EHA doctors and nurses have completed the course. An End-of-Life Care workshop was held in September in Delhi with Drs Mary Ann Muckaden and Naveen Salins of Tata Memorial Centre, Mumbai as resource persons; attended by 21 doctors and nurses. Link Nurse Trainings were conducted at Christian Hospital Chhatarpur and BCH, Tezpur. The IAPC International Conference in Pune was attended by 6 palliative care staff.

A Pilot Study guided by Drs S Duomai and Ann Thyle, Ms C Ratcliff and Mrs Manak was done at Lalitpur, Fatehpur and Utraula. Participants were palliative patients and family. Results showed that enrolment in the service reduced monthly expenses on medicines and travel for 85% patients by home-based care, good symptom management, and provision of subsidised or free medicines. The conclusion is that Palliative Care has great scope to reduce desperate poverty from chronic illness. This was published in Ehospice along with another study on Mixed Method Evaluation of a Palliative Care Service in Rural North India.

EHA entered into Partnership with the Catholic Health Association of India along with CMAI and other like-minded organizations to form a Christian Palliative Care Network. EHA networked with Chief Medical Officer, Directorate of Health Services, Ministry of Health and Family Welfare for inclusion of approved districts by the National Health Mission, Non-communicable diseases program. Lalitpur and Chinchpada hospitals now have opportunities to apply under this program.